The Fight Against COVID-19

To fight the COVID-19 threat, Washington enacted unprecedented economic support. Close to $6 Trillion (approximately 28% of U.S. GDP) came from both monetary and fiscal action. To put this into perspective, Washington spent $1.64 Trillion (approximately 11% of U.S. GDP) to support the economy during the ’08-’09 Credit Crisis¹. Undoubtedly, the COVID threat was taken extremely seriously.

Traditional economic theory would suggest a flood of money sloshing around in the system would spark inflation. But that wasn’t the case after the ’08-’09 and likely will not be the case in the coming years. In fact, The Federal Reserve had a tough time even reaching it’s 2% core inflation target for much of the past 10 years. So, what has changed and is it likely to continue?

In recent years, traditional economic reasoning has given rise to Modern Monetary Theory (MMT). MMT dictates increased government spending will not generate inflation as long as there is unused economic capacity or unemployed labor. It is only when an economy hits physical or natural constraints on its productivity — such as full employment — that inflation happens because that is when supply fails to meet demand, jacking up prices. 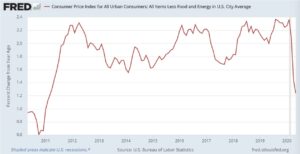 This is not to say that inflation is a thing of the past. Simply, inflation is not likely to be a threat until factory utilization ramps back up, unemployment numbers come way down, employment participation increases, and people return to pre-COVID shopping, dining and traveling. This paradigm does not seem to be around the corner, but years away. Even if a COVID vaccine is developed, the COVID experience has tainted peoples’ habits and lifestyles.

The focus on inflation seems mundane and almost irrelevant. But inflation is the most foundational aspect to financial markets. For example, low inflation translates to low interest rates making bond income anemic and bonds a less effective counterweight to stock volatility. Low rates could force portfolios further into stocks, although the COVID-19 threat and other uncertainties might give some pause. Hence, more broadly diversified portfolios may need to look to move into alternative assets (such as REITs or interval funds) or dynamic strategies to provide enhanced diversification.