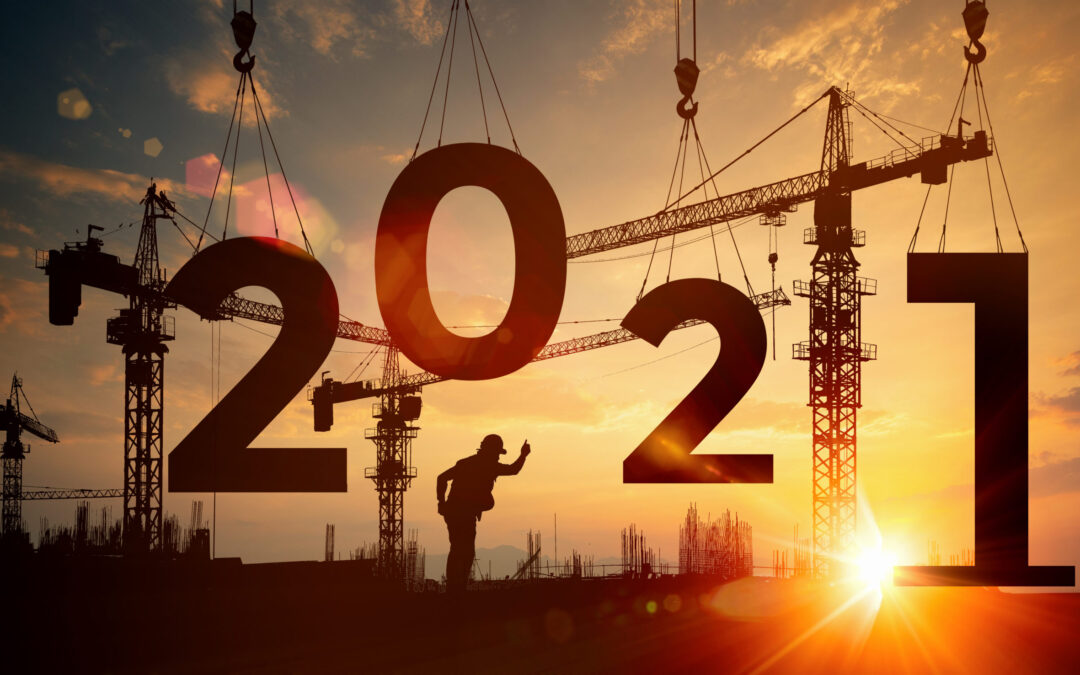 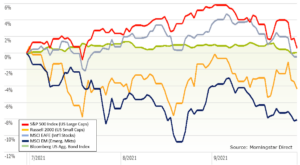 Happy New Year! The fourth quarter of 2021 was met with a mixed bag. The fourth quarter started with a bang, rebounding from the September swoon.  However, the gain didn’t hold for long as COVID paid a visit… again. The more commutable Omicron variant fostered talks of closures and shutdowns which resembled the original COVID restrictions contributing to investor worries.

The favorable 2021 economic backdrop progressed. A shift to the sustainable growth economic phase has begun. Economic activity and supporting data suggest the US and world economies are on track for normal and typical advancement. Every economic cycle differs, yet there are consistent markers. The shaded region on the economic clock offers an current position estimate. 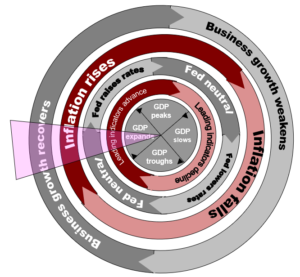 Fostering an environment for gainful employment has been the central concern of the Federal Reserve (the Fed) throughout the COVID period. With low unemployment rates, record job openings and a return to pre-COVID Unemployment Claims, the Fed’s employment mandate has been fulfilled. The Fed has shifted to addressing its second mandate, stable prices.

The initial spark of inflation in the second quarter moderated during the third. The fourth quarter was met with a more powerful inflation surge mainly due to supply chain shocks, continuing base effects and our energy policy. The fourth quarter’s Fed action pivoted to focus its attention to addressing inflation concerns with labor markets in check and the economy on a strong footing. The Fed’s inflation efforts will have a delayed effect, hence investors should not expect immediate relief.

Equity markets witnessed a rotation to more value-oriented sectors, such as utilities and basic materials, while the consumer goods and technology continued their advance. The shift to value-oriented companies comes at the expense of previously bid up growth stocks as well as a broadening economy. 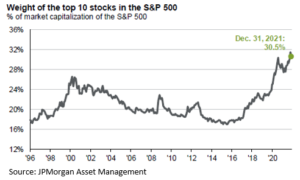 Equity markets were mostly met with volatility throughout the fourth quarter. Most equity classes saw gains of October and early November erased as the quarter marched on.

The shining star continued to be US large cap stocks, which was the only class to notch a double-digit return. However, the precipitous rise of US large caps is accompanied with its own risks, high valuations and concentration concerns. A “narrow market” influenced by a handful of stocks is often considered a questionable advance. Although high valuations make stocks more sensitive to less than stellar news, US large cap stocks have so far continued to defy historic valuation levels.

The damper of Omicron was not enough to sour the spirits of equity investors as all equity markets participated in a Santa Clause Rally, though muted, in the closing two weeks of the year. 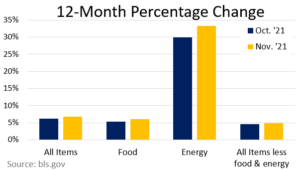 Juxtaposed to the third quarter, inflation for October and November (December inflation has not been release as of this typing) notched higher. Diving into the inflation data shows that high energy prices continue to plague this economic expansion. High energy prices are an onerous levy on all businesses and consumers. Energy costs, a required input into all products and services, must ultimately be reflected in product and service prices.

Beyond energy prices, used cars prices are the next highest inflation source. Used car inflation is a downstream effect of new car scarcity as well as base effects. New car purchasers have opted for used cars as new car availability continues to meet supply chain shocks. Additionally, the depressed prices between April 2020 through March 2021 set a low base for which future prices would be calculated. Both supply chain issues and base effects should resolve themselves in the coming months. 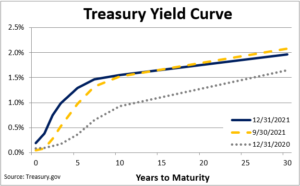 The atypical yield curve shift is a direct result of financial markets reacting to and anticipating interest rate actions by the Fed. Specifically, the Fed began tapering its bond buying efforts in November, then doubled those efforts a month later. With the current tapering efforts, the Fed’s bond buying action is projected to end in March paving the way for the Federal Reserve to formally hike rates far sooner than originally communicated. Monitoring Federal Reserve action will be a central theme in 2022.

The fourth quarter witnessed an economic shift from the early explosive growth economic phase to a more sustainable growth trajectory. The latest round of COVID variant did curb investor enthusiasm mid-way through the quarter. Yet, COVID variants have progressively less investment impact as it appears the world citizenry is learning to live and adapt with the illness.