A Positive and Exciting Future 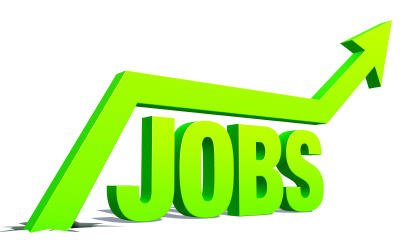 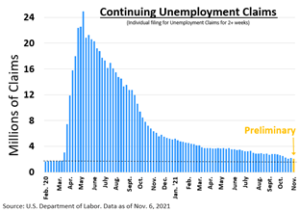 Heigh-ho, heigh-ho, it’s off to work we go! The seven dwarfs’ work song from Snow White is a little cheeky but apropos for the times. There are a number of recent labor market reports that show people are not just going back to work but going back to work with some enthusiasm.

Continuing Unemployment Claims (unemployment claims filed for more than two weeks) is a very good labor market proxy. Continuing Claims has seen some incredible improvement over the past 18 months, with the data showing the most recent down trend since mid-September. This is an indication that few people are in need of unemployment on a regular basis. In fact, the data is very close to the pre-COVID baseline!

Another recent report is known as the Job Openings and Labor Turnover Survey (JOLTS) report. This report tracks where the jobs are and what workers are doing. Friday’s report had a number of very positive facets. The first being that 10.4 million1 jobs are available for the taking. This is near an all-time high set just a month ago. Peering deeper shows there are plenty of jobs at almost every level in almost every industry. So, the business side is not just ready for workers, but looking for workers and willing to offer higher pay.

Workers are also well represented. Specifically, the JOLTS report cited 4.4 million1 “quits.” “Quits” are individuals voluntarily leaving their jobs. The basic question is, “why would someone voluntarily leave your job?” The answer is not rocket science, it’s when one has a better opportunity. Hence, “quits” indicate people who are positive and excited about their future. The 4.4 million “quits” is the highest number ever recorded. Hence, the excitement of the seven dwarfs signing heigh-ho, heigh-ho seems to fit the situation.

This week marks the signing of the $1.2 Trillion infrastructure bill2. There is plenty in the bill for everyone to get excited about. Yes, repairs and enhancements to 173,000 miles of roads and 45,000 bridges have been identified as well as other surface transportation items. Improvements to airports and ports are included. Beefing up the electrical grid and broadband communications are in the bill. Funding for the infrastructure bill will come in various forms including repurposed funds, unspent budget dollars, increased taxation and deficit spending spread over 10 years.

This is an economic friendly bill. The bill is akin to a company reinvesting in itself to improve its factories, processes and better technology implementation ultimately improving products, services and efficiencies. Additionally, the bill is expected to create 2 million jobs. This offers even more reason to boost willing workers’ enthusiasm. There are a lot of encouraging initiatives to suggest U.S. workers are in the catbird seat.

Every year, the holidays seem to come faster than planned. Recent retail sales suggest people are staying ahead of their shopping lists. We hope you’re able to take part in the shopping trends and looking forward to the holiday season.