Our Due Diligence Attempts to Mitigate the Risk of Unwarranted Opportunities 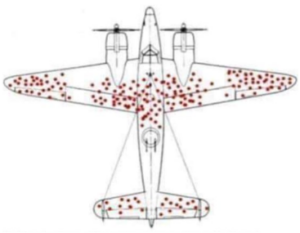 This is a picture tracking bullet holes on Allied planes that encountered Nazi anti-aircraft fire in World War Two. At first, the military wanted to reinforce those areas, because that’s where ground crews observed the most damage on returning planes. However, Hungarian-born mathematician Abraham Wald pointed out that this was the damage of the planes that made it back. He suggested the Allies should armor the areas where there are no dots because those are the places where the planes won’t survive when hit. This phenomenon is called survivorship bias, a logic error where one focuses on things that survived when one should really focus on the things that didn’t.

Survivorship bias has many applications as well as offers many warnings to investors. First and foremost, when conducting investment due diligence, an analyst should always consider whether the current investable universe has always been the only investable universe.

Ever hear about the Steadman Funds? Steadman was a family of four funds with abysmal returns so bad that they earned the name “The Dead Man Funds.” Oddly, the funds operated for decades. The Steadman Funds, managed by corporate attorney Charles Steadman, were plagued with high fees while the SEC cited Steadman with suspect financial transactions and conflicts of interest. Ultimately, when Charles Steadman passed, the Steadman Funds are rebranded Ameritor Funds. Lesson learned… one way to escape public awareness is to change name. Ameritor operated for another 14 years, finally closing in 2012.

Many investors as well as investment professionals may have forgotten of Munder NetNet Fund or Goldman Sachs Tollkeeper. These were internet-focused technology funds during the internet infancy of the late ‘90s. After the tech wreck of the early 2000s, these funds, as well as many other internet-focused funds, simply went away never to be heard from again. Do you recall any ‘90s tech funds?

Wall Street has a knack of introducing investment products at the heightened awareness of a certain topic, then simply disappearing. At the time, the sought-after theme or untapped market seem to be a guaranteed winner. There are several current questionable situations, of particular note are Environmental, Social and Governance (ESG) labeled funds. Don’t get me wrong, ESG is a bona fide process with decades of proficiency. But more recently, some funds are a “greenwashing” themselves attaching the “ESG” label with virtually no ESG implementation to garner investment dollars. Other current questionable investment themes include “meme stocks” (stocks mentioned on social media, such as GameStop), cryptocurrency and Special Purpose Acquisition Companies (SPACs).

No due diligence is full proof, but reasonable investigative rigor, awareness of industry tactics, and a bit of skepticism could go a long way to ferret out questionable investment opportunities. The investment graveyard is fraught with failed products, themes or strategies that couldn’t stand the test of time. Our due diligence attempts to mitigate the risk of unwarranted opportunities.