The Fed and the ECB will Begin Removing Financial Support 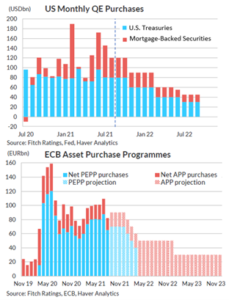 When a severe injury occurs, such as a broken leg, doctors do their best to set any bones and assist the patient to begin the healing process. At some point, the patient can rid themselves of such crutches as strength returns. In a similar fashion, a severely hindered economy utilizes the aid of economic crutches during periods of turmoil. Yet, we are nearing a point that economic doctors (central banks) are ready to remove the crutches.

Central bank doctors triage the economic patient with an I.V. of nutrient rich cash. Since the COVID pandemic began, central banks of all major economies have lowered interest rates and began buying bonds injecting cash into the monetary system for the ultimate recipient… the people. This monetary policy direction has created tremendous support, allowing the economy to heal much faster than initially anticipated. Monetary policy has certainly done its part; to some it has done more than enough.

The central bank doctors feel the time has come to remove this vital support. The first step is to remove the I.V. of cash. The Federal Reserve (the Fed) and the European Central Bank (ECB) have been communicating their intention to reduce bond purchases. Communicating doctors’ intent months in advance allows investors to prepare for the upcoming change. The point has arrived for the Fed and the ECB to begin removing the financial support which got us through the past 18 months or so. The announcements are expected in the coming days.

Tapering the Fed’s and the ECB’s bond purchases is the first step to letting rates float on their own. Weaning the patient off an I.V. cash drip will likely take about a year while the ECB may be extended beyond a year. After step one is completed, the second step of actually raising near-term rates begins. Rate increases are expected in a year hence, in the November-December 2022 time frame in the U.S.

Other central banks have similarly communicated a return to a more normalized monetary policy by removing their crutches. This includes the Bank of England, Bank of Canada, and Bank of Australia. Returning to a normal interest rate environment can spook investors, after all investors have become accustomed to readily available cheap cash. Lest investors forget, removing crutches means the patient has healed, or at least healed enough to stand on his own. That’s a good thing. Focusing too much on potentially possible near-term credit market headwinds may obscure one’s view of the patient’s progress.