The Much Anticipated Raising of Rates has Begun 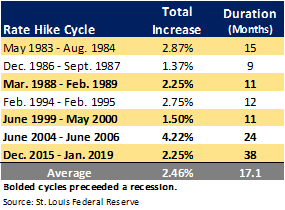 The much anticipated raising of rates has begun. The Federal Reserve (Fed) often communicates its intention well in advance not to shock markets, but this rate hike preparation started well over a year ago. Talk about building anticipation. Some could argue the significant lead time backfired as the stretch allowed investors to overly scrutinize each economic data point in the attempt to guess at first rate increase nuances. The Fed must have taken lessons from Hollywood. How long have we been waiting for the Top Gun sequel?

Well, part of the answer has been revealed. The Fed raised the Fed Funds Rate 0.25%1 at the conclusion of its meeting this past Wednesday. The guessing game begins on future hike duration and aggressiveness. For perspective, the last seven hike cycles lasted an averaged 17 months and averaged 2.46% in total increases.

History may not repeat itself, but it does rhyme. As mentioned in previous musings, there are elements of a mid-2010s economic environment that preceded the 2015-2019 hikes. The markets have priced in a peak rate range between 2.25% – 2.50% in May 20232. (Interesting how market expectations approximate historical averages.) Admittedly, the probability is only 27.3%2 as of this typing, hence there is minimal target conviction. From this vantage point, this seems a little too aggressive.

The implications will leave no investment untouched as interest rates are ubiquitous. Cash yields (i.e., savings accounts, CDs and money markets), correlated to near-term rates, are poised to see higher yields. Higher preference for earnings will lend itself to value companies over growth companies, which have survived on low-cost capital. Real estate, generally, will see higher yields over time due to rent bumps and escalation clauses. (However, I would be remiss not to recognize the massive real estate paradigm shifts which could overshadow higher rate perks.) Lastly, bonds will see a headwind. However, the headwind can be overcome with various strategies such as bond portfolio structuring, rolling-down-the-curve, tactical selection, and opportune transactions… many processes implemented in normal bond portfolio management.

In the end, rate hike cycles are not new. We’ve seen this many times before. Slow-and-steady are less disruptive than the herky-jerky. Maintaining a well-diversified portfolio will help get through this next cycle.

Diversification may help reduce, but cannot eliminate, risk of investment losses. Opinions expressed are those of Heritage Financial and not necessarily those of Lincoln Financial Advisors. CRN-4570731-031822