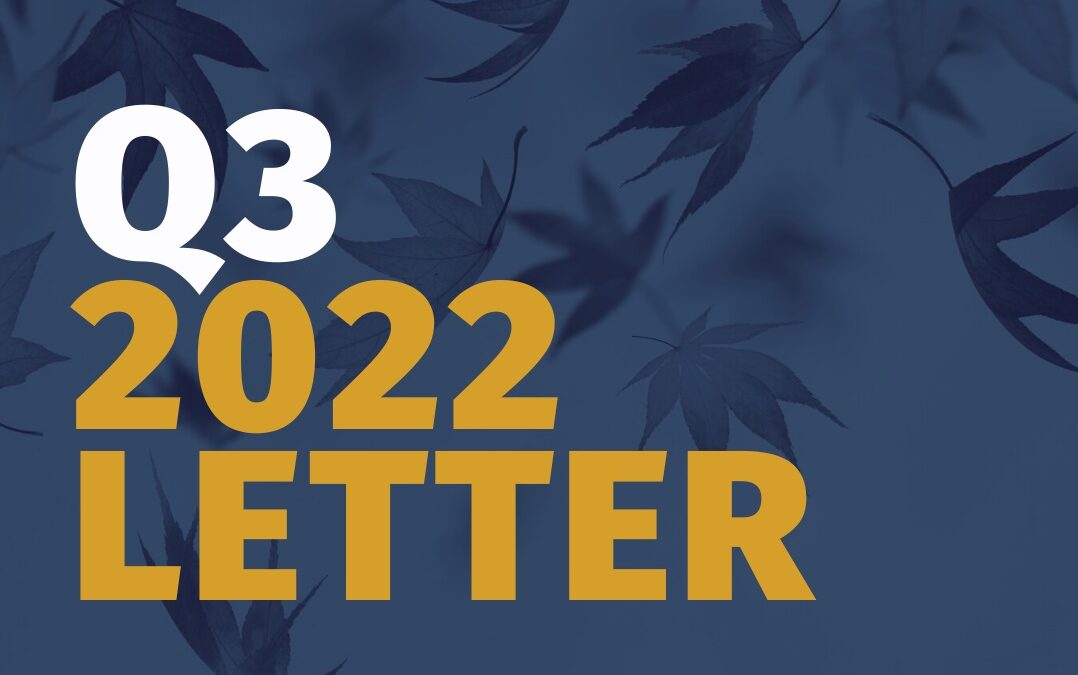 The financial markets began the quarter with a welcomed summer relief rally. The rally accompanied pupils’ giddiness eager to explore summer’s freedoms; footloose and fancy free. Unfortunately, the quarter closed with the big bad Federal Reserve huffing and puffing the jovial winds away.

July seemed to begin with the winds of change. The summer COVID variant was more infectious, yet 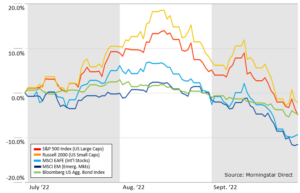 less harmful as COVID hospitalizations and COVID deaths did not breach the peaks of previous strains. In fact, the summer peak generally remained below past COVID troughs. Ukraine was able to hold off their Russian aggressors and even regain lost ground. Supply chain restorations were underway repairing economic stress fractures. Recreation and leisure activities picked up with fewer hiccups relative to the previous summer. Mask mandates were halted in recognition of a more docile COVID strain. Although not out of the COVID endemic woods yet, a clearing seemed to lay just ahead.

Unfortunately, the fairy tale ending turned into a horror film.  Lurking beneath the cheery atmosphere, a silent monster grew. Hints of meandering fog were noticed by many via temporarily higher gasoline prices and elevated foods costs. The financial markets saw the drifting fog but relied on the word of the powerful Fed Chairman Powell that the prescribed monetary medicine would soon be fully consumed.

Out of nowhere, the great Chairman Powell emerged from the Jackson Hole meeting claiming the inflation monster has grown more insidious. Powell exclaimed the existing medicinal policy would not suffice! More, more and more medicine will be required to slay the dubious inflation monster. Upon Powell’s announcement the clouds darkened over the financial markets as the quarter came to an end. So, here we stand with three quarters expired realizing the summer clearing we saw was merely an illusion.

Focusing on the clouds above, the populace seemed to forget… the darkest is before the dawn. With midterms near, removal of political uncertainty is before us. The inflation monster may not be as strong as it appears. Energy prices have fallen and most commodity prices have tumbled. Home sales have dropped more than 20%1 and rents have begun to soften. A slowing housing market will lead to truncated furnishing purchases as well as home and financing related services. With work and school life returning, travel and leisure demands have lessened. Economic observers recognize the latest chapter is not the end of the story. Of particular note is the Federal Reserve Bank of Atlanta’s GDPNow forecasting technique is predicting Q3 growth of 2.4%2.

Inflation and the possibility of recession have come front and center. Financial markets have become consumed with the prospects of both as the Federal Reserve’s (Fed) interest rate action is the cure for inflation, but heightened and prolonged interest rates increase the probability of recession. At this point, the Federal Reserve has chosen to focus on tackling inflation as price instability can become an economic cancer, whereas a recession is more akin to a recoverable seasonal cold. 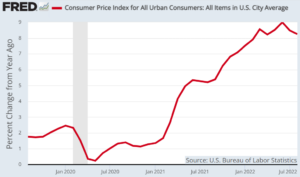 trend. (The initial September number is due after this typing.) Unfortunately, the July and August releases proved inflation had spread more broadly rousing the Fed’s concern. More recent fundamental data near quarter’s end did show a propensity for retreating inflation in the coming months. Inflation and its components will be closely monitored by the Fed and other economic spectators.

The jarring comments by Powell were followed by a surprise decision from the Bank of England (BoE) to inject cash into the U.K. economy attempting to prop it up. Ironically, sudden unexpected governmental directional change aimed to offer solace is often interpreted negatively by financial markets prompting thoughts of missed risks. BoE’s statement capped the quarter and solidified lower global equity markets.

The Federal Reserve’s constant march for higher rates took a toll on fixed income assets. Credit market analysis suggests the bond market is preparing for a recessionary environment. The timing of which is still to be determined.

The bellwether 10-year Treasury bond increased 85 basis points (or 0.85%) during the quarter and 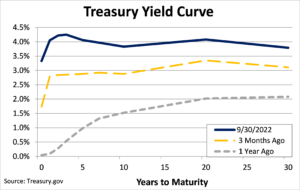 over 230 basis points (or 2.30%) since the beginning of the year3. The pace of such an ascent hasn’t been seen since 19873. The seriousness to combat inflation should not be ignored. Although it can be stressful during the battle, the ultimate calm has always been accomplished.

We understand extended pullbacks can foster unease. History has shown repeatedly that the best path is to stick with your portfolio allocation and stay the course. Yielding to near-term volatility can lead to lower total returns over time. Should you have any questions or just want to talk, please don’t hesitate to reach out to us. Our well wishes go to those caught up in the Hurricane Ian aftermath. Enjoy the cooler days ahead as autumn arrives with changing colors.

The opinions expressed are those of Heritage Financial and not necessarily those of Lincoln Financial Advisors Corp. The S&P 500 index measures the performance of 500 stocks generally considered representative of the overall market. NASDAQ Index measures the performance of the 100 largest non-financial securities listed on The NASDAQ Stock Market. Forward-looking statements are subject to certain risks and uncertainties. Actual results, performance, or achievements may differ materially from those expressed or implied. CRN-4983783-100622